Her recent victories during the Championships prove her dedication and passion for this sport, as she rounded out the first match of the season with wins in the Ladies .22 Open, Ladies Limited, Ladies Open, and Ladies Steel Master National Champion. Jessie set new national records in the Ladies Limited and the Ladies Open. During this event, Jessie used her Taurus PT1911 Taurus single stack and custom open 9mm to carry her through the course of fire at the Volusia Country Gun & Hunt Club. She also used her PT1911 Taurus with a .22LR conversion kit to capture the 1st place position in the Ladies .22 Open division. 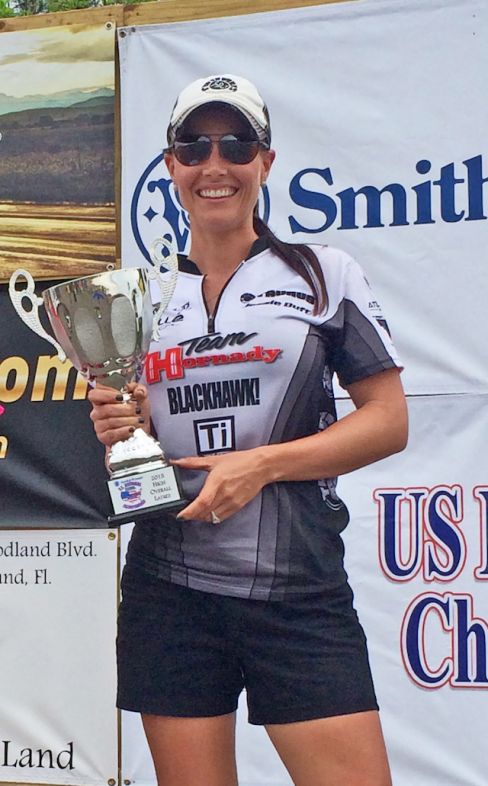 After the competition, Jessie Duff stated, “The Steel Nationals marked my first match of the 2015 shooting season, and I couldn’t be happier with kicking the season off with a clean sweep! Shooting Steel is one of my favorite matches, it allows shooters to go all out with speed, and you really see some incredible talent at this match. The new location, Volusia County Gun & Hunt Club, for the Steel Nationals is a great facility, and has plenty of room for this type of match. I enjoyed shooting on the range, and think the match has found a great place to call home.”

The US National Steel Championships was full of excitement and adrenaline this year with eight challenging stages, a list of veteran shooters, and anticipation for the upcoming season. Under the watch of Match Director Mike Calloway, the event ran very smooth and the high level of professionalism by the staff and volunteers was greatly appreciated by Jessie and the other shooters.

Jessie next match will be the USPSA Single-Stack National Championship, May 6-9, 2015 in Barry, Illinois.

Jessie Duff has taken her shooting career of a beginner, all the way to a top ranked professional, earning multiple World and National Champion shooting titles, in five different shooting disciplines. Among these are the prestigious Bianchi Cup and the World Speed Shooting Championships. Jessie has also ranked in numerous regional and state champion matches as well. Outside of shooting, Jessie is a TV personality on the hit series Friends of NRA, on the Outdoor Channel. Reaching this level of shooting performance in her career, defines a well-disciplined competitor and role model for the Taurus Shooting Team.

Taurus International Manufacturing, Inc. is proud to be the U.S. importer of all Taurus brand firearms manufactured in Brazil and to be the manufacturer of the model PT-22, PT-25 and PT-738 pistols made here in the US.  Taurus International services all Taurus brand firearms under the LIFETIME REPAIR POLICY™ as well.  For additional information about Taurus, visit www.taurususa.com. High-resolution images are available at www.taurusdownloads.com.