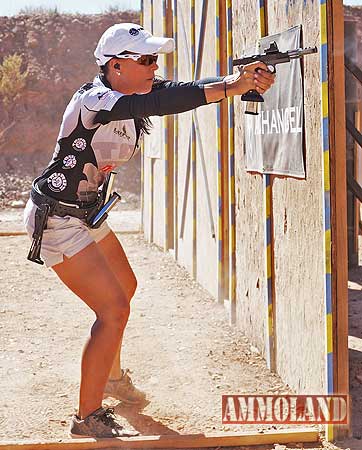 Miami, FL –-(Ammoland.com)- Taurus, the global leader in revolver manufacturing, sends another round of congratulations to pro-shooter, Jessie Duff, on her sixth consecutive Limited win and second consecutive Open win at the Southern Utah Shooting Sports Park in St. George, Utah at the Nationals Championship.

The Nationals were held for the first time in St. George, Utah at the Southern Utah Shooting Sports Park. With perfect temperatures and beautiful landscape in the high desert mountain area, the only thing against the shooters was the dust and the wind, a shooters’ worst nightmare!

In anticipation for next year’s IPSC World Shoot, the USPSA staged the Nationals competition at a very difficult level to help prepare US shooters. The challenging course of fire lead to more partial targets, hard cover and no shoots, which are more difficult with iron sights in the Limited Division.

“The target distances were further than normal and the majority of the stages were big round-counts, testing the shooters skill, stamina and every aspect of the shooter’s ability,” commented Taurus Team Captain Jessie Duff. Preparing for a National Championship takes a lot of work, training and dedication – which was doubled since it was a back-to-back National Championship. “It’s very rewarding to bring home victories in both divisions and I enjoy sharing these victories with my sponsors,” continues Duff.

Jessie shot a good, strong match in both Limited and Open and was able to maintain a steady and consistent pace for the majority of the match, which was what it took to win. Jessie shot the Limited first, then made the transition to Open.

“After the Limited match was over, I had to switch gears and get ready for Open. This was one of the most challenging Nationals I’ve shot in a few years with both Limited and Open and my ability and patience was tested, but I felt the match was exactly what a National Championship should be,” states Jessie Duff.

The staff at the shooting park put countless hours of hard work into the facility by preparing the range, formulating the stags and running the match.

“We are very proud of Jessie and her winnings at the Nationals. Jessie is a great role model for new and experienced shooters, possessing the desire to win as well as the sportsmanship that builds character and integrity. We are happy she is part of the Taurus family as she forges forward being an ambassador for the shooting community,” states Sarah Perry, Director of Marketing.

About Jessie Duff:
Jessie Duff has taken her shooting career of a beginner, all the way to a top ranked professional, earning multiple World and National Champion shooting titles, in five different shooting disciplines. Among these are the prestigious Bianchi Cup and the World Speed Shooting Championships. Jessie has also ranked in numerous regional and state champion matches as well. Outside of shooting, Jessie is a TV personality on the hit series Friends of NRA, on the Outdoor Channel. Reaching this level of shooting performance in her career, defines a well-disciplined competitor and role model for the Taurus Shooting Team. http://www.taurususa.com/team-taurus.cfm

About Taurus:
Taurus® is the global leader in revolver production. Taurus International Manufacturing, Inc. is proud to be the U.S. importer of all Taurus brand firearms manufactured in Brazil and to be the manufacturer of the model PT-22, PT-25 and PT-738 pistols made here in the U.S. Taurus International services all Taurus brand firearms under the LIFETIME REPAIR POLICY™ as well. For additional information about Taurus, visit www.taurususa.com.